This article contains spoilers for the films Phantom Thread (2017) and My Cousin Rachel (2017).

I’m going to give another warning:  this article will not incessantly praise Phantom Thread.  Critics, podcasters and friends raved about Phantom Thread‘s eroticism, plot twists and gender dynamics.

Phantom Thread does contain eroticism, plot twists and gender dynamics.  It also has some interesting nuggets about antisemitism in postwar Europe.  But Phantom Thread did not quite blow my mind.

It’s basically about a guy who gets hooked on magic mushrooms.

Reynolds Woodcock makes dresses.  He makes sumptuous, elegant, high- fashion dresses worn by princesses, politicos and socialites in 1950s London.  Woodcock gets praise for his glorious work, but women run the House of Woodcock.  He employs a handful of dedicated seamstresses.  He adopts muses for a couple of months before politely dismissing them.  His sister, Cyrill Woodcock, runs the business.  Images of Woodcock’s deceased mother haunt him.  Day-Lewis plays the only major male character in the film.  The film shows Woodcock’s frailty, and the women holding him up.

Enter Alma.  At first, Alma seems like just another muse.  Woodcock takes out his frustrations on Alma and creates a psychologically abusive relationship.  But Alma takes it.  And eventually, she throws it back.  She forces Woodcock to see his dependence on women.  She wants his babies and influence in his fashion company.  And she gets everything she wants, in true Gone Girl fashion. 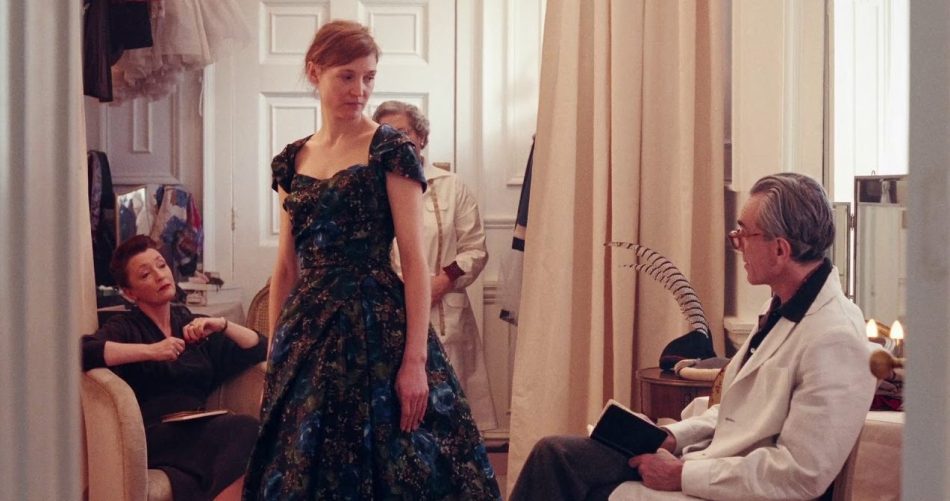 1. Throughout the film, we see Alma speaking to a shrink about her relationship with Woodcock.  At the end, we see Woodcock’s head has been laying in her lap the whole time.

2.  Alma poisons Woodcock with mushrooms and nurses him back to health.  This happens often.

3. Woodcock really gets off on it.

Woodcock sews secret messages in all the dresses, but they don’t amount to anything major.  Odd, for a movie called Phantom Thread.

I got a little thrill out of the ending, but from the moment I saw Alma kneeling at Woodcock’s bedside, I rolled my eyes.

Because I had already seen this movie.  It’s called My Cousin Rachel.

In My Cousin Rachel, a charismatic but mysterious Rachel comes to live with Philip, the handsome young heir to a large English estate.  Philip instantly distrusts Rachel; he believes she tortured and killed his uncle, her husband and the estate’s original owner.  When she arrives, however, she charms the household and Philip.  They engage in an intoxicating, maddening relationship.  He proposes to her on the eve of his next birthday, the day he gets everything.  Meanwhile, Philip has been mysteriously falling ill, and Rachel has been nursing him back to health.  Sound familiar?

Throughout My Cousin Rachel, Philip and the audience constantly second- guesses Rachel’s loyalty.  Did she kill the uncle?  Is she killing Philip?  Is she only after his money?  Does she really love him?  At the end, Rachel throws herself off a cliff, leaving no questions answered.  She leaves us with our own theories and evidence.

At the end of Phantom Thread, we get a fucked up dude who likes it when his wife poisons him.

One of the endings stayed with me longer.

Both of the films deal with oppressed women and the few ways women have to put men in their places.  Things were certainly more sexist in Victorian and postwar England, but men still oppress women and women still outsmart men.  Both films also show codependency.  Both films tell important stories important ways.

But ladies, if you get in a fight with your significant lover, for the love of God do not poison him with mushrooms.

0 comments on “Phantom Thread vs. My Cousin Rachel”