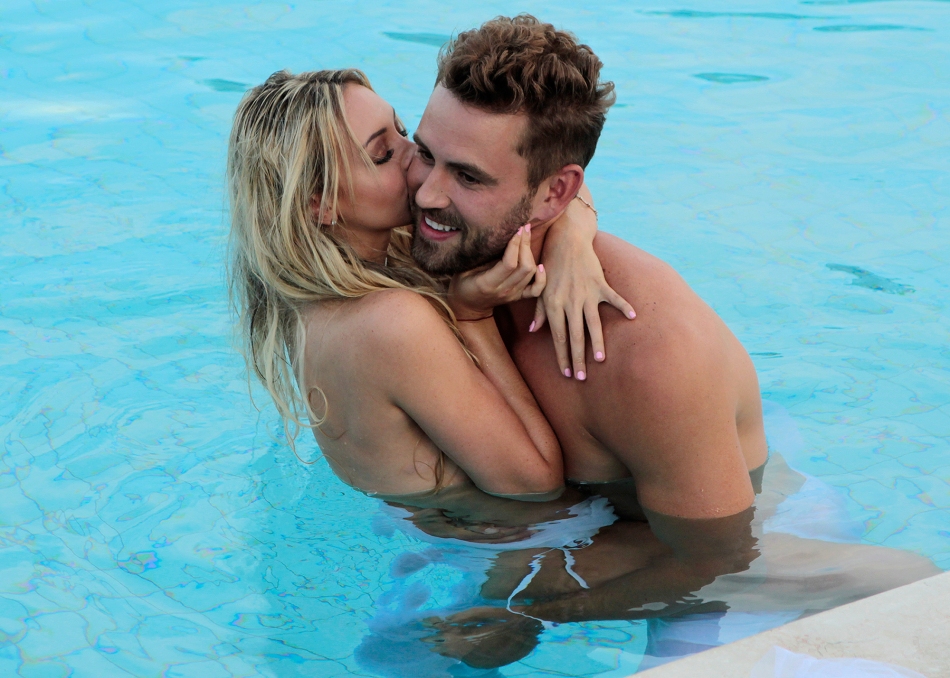 Welcome back, Bacheloristas.  We’re here to watch Nick Viall, America’s fuckboy,  find love on  ABC. Elan must really want a job at Bravo because this Bachelor season took a serious turn for the trashy. 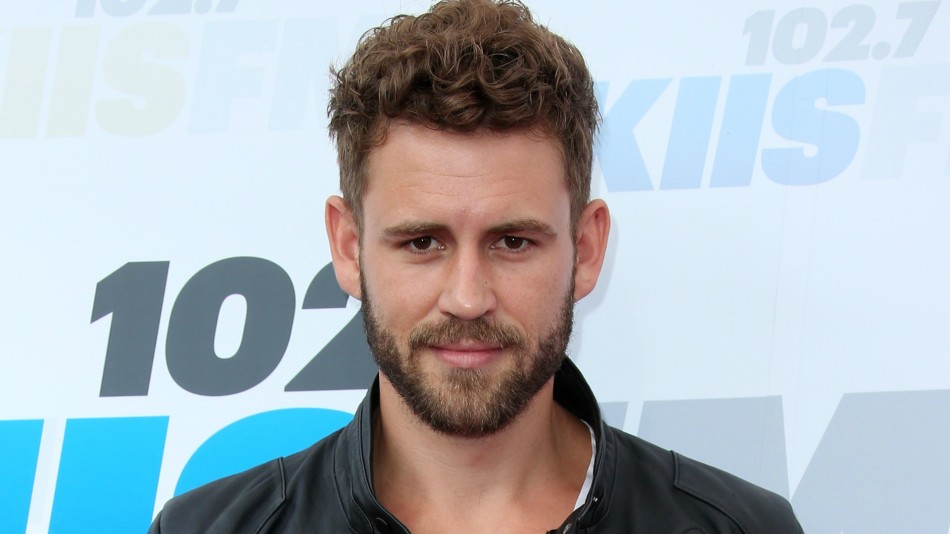 Nick got runner- up on The Bachelorette twice.  The first time, Andi Dorfman shamelessly boinked Nick before running off with jock Josh.  We saw a heartbroken Nick on The Men Tell All acting all precious about his virginity and shit. (read: Nick wasn’t a virgin, but he thought sex was “meaningful”).  In Season 11, Sassy Kaitlyn strung cute Nick along right until the end, when she reveals her heart belonged to Shawn all along.  At this point, we feel sorry for Nick. What kind of franchise dumps a dude TWICE?  But then he tried getting engaged again on Bachelor in Paradise.  He made it all the way to the end before deciding he’d actually rather be the Bachelor, and dumping would- be fiancee Jen. 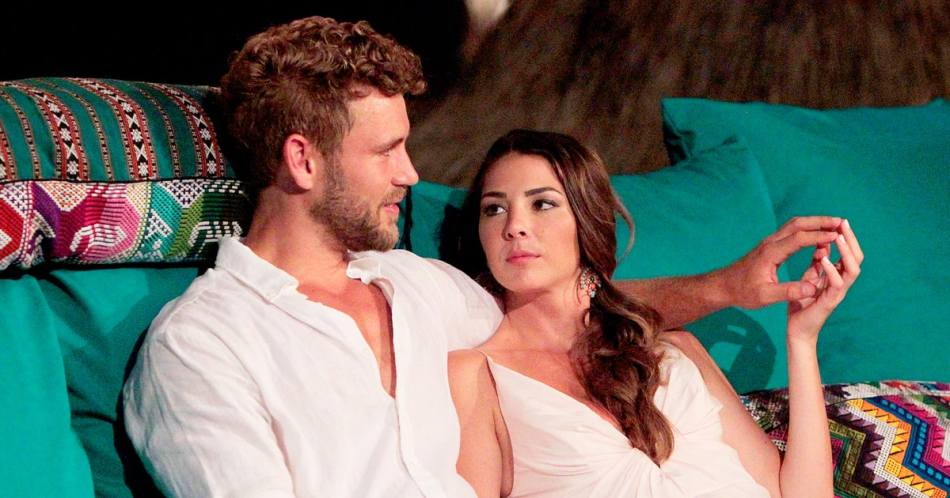 At this point, Nick’s shameless.  He had his virginal friends write character references.  He unabashedly embraced the Basic Bro lyfe.  He did the Instagram product pimping.  And he somehow managed to land a major network show with a patchy beard and a speech impediment.  Go you, Nick.

Forget this Bachelorette in Paradise shit.  Nick wants to dump 20 trashy babes AT ONCE. 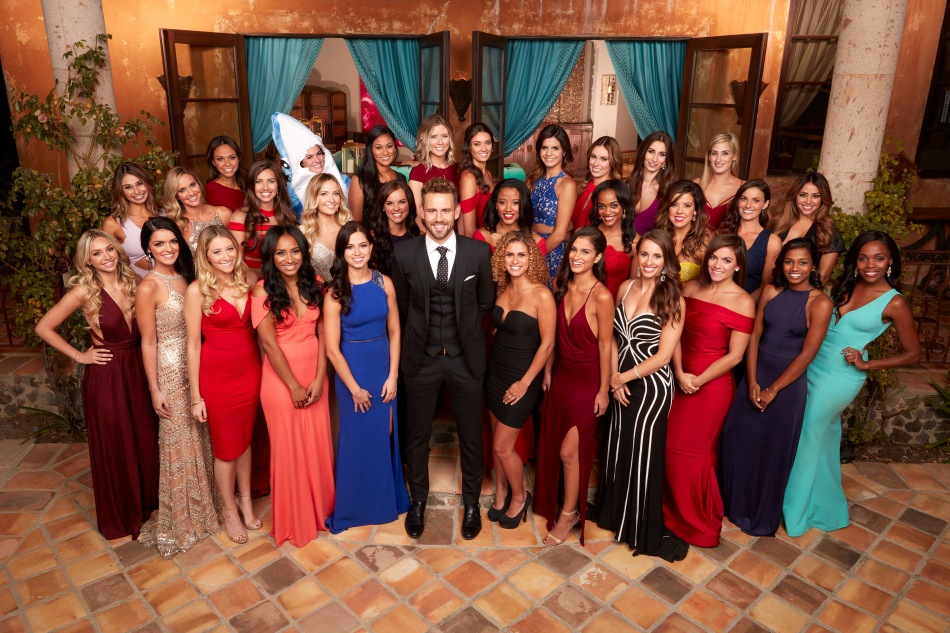 On to the recap:

The first dating challenge is America’s Next Top Model.  The women must compete in a photo shoot where they all dress as trashy brides: biker bride, pregnant bride, 80’s bride, bridesmaid… bikini bride?  Corinne whips her top off and rubs her tits all over Nick.

Nick and another girl pose as Adam and Eve bride which isn’t even a type of bride.  The girls with the weakest pics get eliminated!  Just kidding.  They all have to suffer through the dreaded Cocktail Party.

Corinne, resident slut (love her!) stops at nothing to stick her tongue down Nick’s throat.  And it totally works.  He gives her the rose!  The other girls resent Corinne and “question Nick’s character”.  Honestly though, you gotta have chemistry.  Right?

Next Nick goes on a Boring Date with a Real Girl (Danielle M).  They rent out Santa Monica Pier (not hard at 3:3o AM) and she shares a story about how her last relationship ended when she found her fiancee’s dead body.

“I didn’t even know he was an addict,” she sobs.

She confesses that she fears Nick will overdose if they begin a relationship.  Nick gives her the rose because how could he not?

Next, Nick rounds up the Weaklings for the most bizarre Bachelor date ever.  A one night stand from Nick’s past made it to episode 2.  They call her Liz.  She served as one of Jade’s bridesmaids. She tells Christen that Nick and she got drunk and hooked up and that he makes love like a robot.  He asked for her number.  She said “Nah bitch” and went away.

Now she’s back for drama.  So the producers tailor- made a Breakup Date for her.  Group 2 visits a Breakup Museum where they view relics of past relationships such as a used dog hairbrush, a Nebraska cheerleaders uniform someone probably lost their virginity wearing, and, oh yea, Nick’s million dollar Neil Lane diamond ring he had made for Kaitlyn.  The group walk in on a totally staged breakup and proceed to watch as other couples act out breakups.  Then he puts the women through breakup improv.  Some of them nail it.  Josephine slaps him.  Skethcy Liz comes up and reads this heartfelt manifesto about how she wants another chance.

Flash forward to the cocktail party on Hollywood Boulevard.  These ladies look like the produce aisle at Von’s.  So many breasts.  Liz looks like the baddest bitch there, but her romper has a butt cape.  She and Nick have a chat.

“The more I talk to Liz, the less she makes sense,” Nick says.  Nice way of saying she made a lot more sense drunk.  Your bad, Liz.  Liz makes another plea for his attention.  He says “Nah bitch” and sends her away.

Nick says some nice things about how he doesn’t regret their beautiful night of robot sex because YOLO and returns to the Valley of the Dolls.  And WE GET NO ROSE CEREMONY.  Did ABC not feel like paying Chris Harrison?  Are Rose Ceremonies too classy for the new Bitchlor? WHERE IS THE ROSE CEREMONY ABC??

For the credits, Alexis celebrates her one year boobiversery with Nick and a pair of cupcakes.  She got implants a year ago.  AND SHE LOVES ‘EM.  I couldn’t tell but I think her boobs actually ate the cupcakes.

Better pics coming as soon as I can figure out how to get another free Hulu subscription.  But I’m really loving these ambiguous promo shots from ABC. 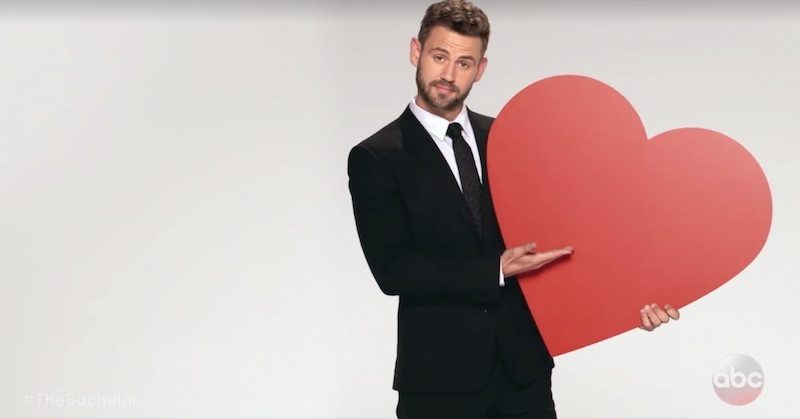