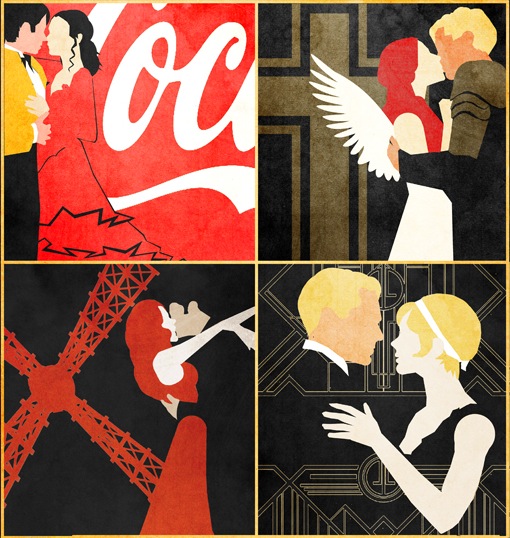 Australian auteur Baz Luhrmann directed Strictly Ballroom (1993), Romeo + Juliet (1996), Moulin Rouge! (2001), Australia (2008) and The Great Gatsby (2013).  Baz Luhrmann doesn’t write musicals per se (only Moulin Rouge!, which features musical numbers both original and adapted classifies), but each film features music as a central part of the story.  Luhrmann has become infamous for his films’ soundtracks.  The director has commissioned artists like Jay-Z, Radiohead and Florence + The Machine to create originals for his movies, and arranged covers of song from artists like U2, Prince and Beyonce.

Andrew Davis, Shane Scheel and Christopher Lloyd Bratten created  For The Record: Baz Luhrmann a few years ago.  After this summer’s release of The Great Gatsby, the creators modified the original show to include Baz Lurhmann’s most recent extravaganza.

This year’s For The Record: Baz Luhrmann melts Strictly Ballroom, Romeo + Juliet, Moulin Rouge! and The Great Gatsby into a two- act uber musical.  Luckily, all four films focus on a couple and follow the same general formula.  The show mashes up songs and scenes from all four films:  “Love Is Blindness” from Gatsby becomes Romeo’s anthem; “Kissing You” from Romeo + Juliet scores Gatsby and Daisy’s reunion; “Come What May” from Moulin Rouge! becomes the love song for all four couples. 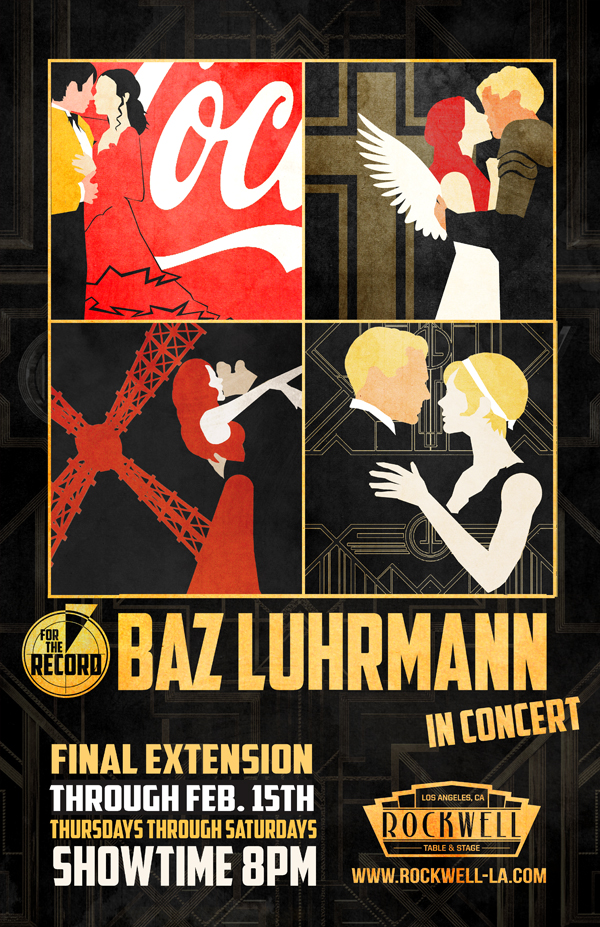 Scheel and Bratten’s re- imagining of Baz’s films represents something truly remarkable.  Baz re-imagines stories from Puccini, Shakespeare, and F. Scott Fitzgerald, and many of his songs are covers, making his movies hardly original.  But somehow, recreating Baz’s recreations feels totally fresh.  Lurhmann’s films are infamous for their lavish sets and costumes. The musical takes place across a small dining room floor with minimal costumes and props, yet the story excels even without opulence.  The show proves how totally good Lurhmann’s films really are.

Die- hard Baz fans will experience pure nirvana watching the musical.  People who have seen one or fewer of his films will be wowed by the show regardless. The talent alone will blow you away.  The actors not only sing, dance and act; some of them play musical instruments.  The gentleman who played Gatsby during our show did a better job than Leonardo DiCaprio.  At times, actors recreate the original films’ timing.  Sometimes, they give the characters their own quirks.  Even if the actors aren’t doing what you’re used to seeing on the screen, they stay true to the spirit of the original material, just as Baz stays true to the original spirits of his sources.

The Rockwell sells tickets online priced $25- $55 dollars.  Buy a good seat.  The more expensive seats are worth it.  Some of the $25 partial view seats have giant pillars in the way that block some of the action.  The venue also has a two item minimum, which means you must purchase two menu items with your ticket.  The items can be anything, like soda and coffee.  Waiters serve throughout the show.  My advice?  Buy a couple of drinks (the craft cocktails created for the show are especially good) and eat dinner someplace else.  The menu is quite pricy and you’ll want to be slightly boozed up during the cabaret- style show anyway.

Buy tickets early; shows sell out.  You can show up standby and the house will try to accommodate you, but no guarantees.

Shows run most Thursday through Sunday nights until February 15. Check the Rockwell’s schedule for more information.

0 comments on “Attention LA: For The Record: Baz Luhrmann is amazing, go see it now.”